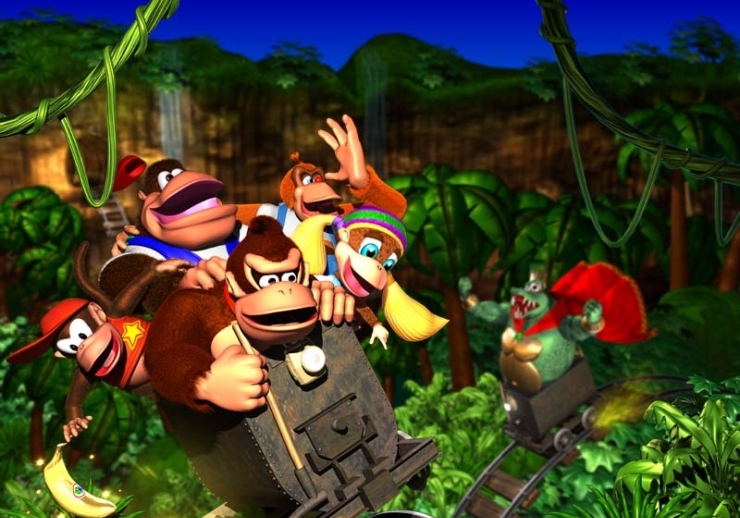 Nintendo 64 owners went nuts in 1999 when commercials for Donkey Kong 64 began airing on television. These advertisements featured live-action “footage” of people up in arms after seeing their city covered in fruit and nuts at the hands of Donkey Kong and his band of fruit gun-wielding pals. And when we all saw the glorious gameplay in action, with the narrator informing us that the game came bundled with the Expansion Pak on account of just how massive it was, the hype factor reached the next level.

We eventually learned that the Expansion Pak was mostly necessary to prevent a game-breaking bug (and that it cost Rare a fortune to bundle it with every copy of the game). Even then, I just can’t look back at that old commercial without being filled with sheer nostalgia. I was just 13 years old when I first played Donkey Kong 64, and at the time it didn’t get much better than that. You can imagine my excitement when news spread that the Nintendo 64 classic was releasing on the Wii U Virtual Console.

Sadly, time hasn’t been too kind to certain aspects of Donkey Kong 64, with minor flaws now looking more like glaring offenses. On the plus side, the bulk of the game is still loads of fun thanks to some really tight platforming mechanics, and if you miss the days of collect-a-thon 3D platformers, perhaps the Kongs’ quest will strike a positive chord with you. 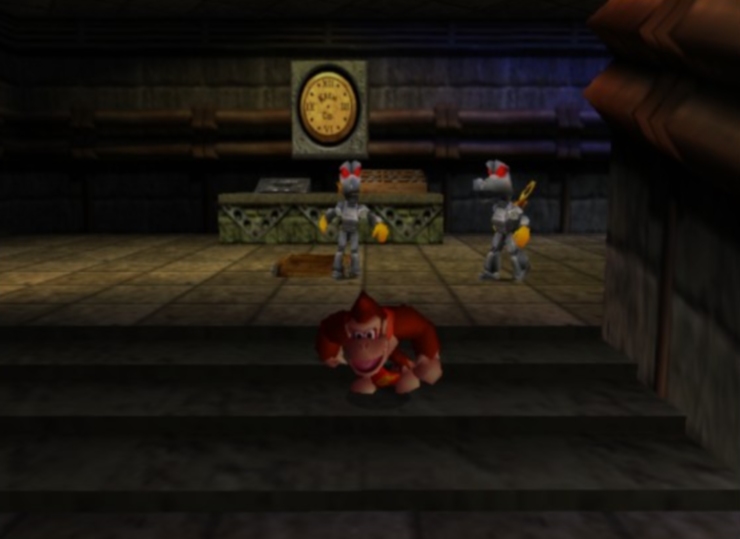 The game kicks off with King K. Rool attempting to blow up the DK Isles. Things go haywire with his Blast-O-Matic so the rotund villain sets up shop right by DK’s home. Word spreads that K. Rool is back, so DK sets out to stop him. It’s not exactly riveting as far as storytelling goes, but at the very least, Donkey Kong 64 is more a turf war story than the usual tale about a damsel in distress.

Donkey Kong 64 shares many similarities with Super Mario 64, Banjo-Kazooie, and practically every other 3D platformer on the Nintendo 64. There are literally hundreds of collectible items strewn about the large stages, each color-coded and tied to specific Kongs. Diddy, for example, can only pick up red bananas, so if he spots Tiny’s purple bananas, he won’t be able to grab them. Each Kong can find 100 of these colored bananas in every level, as well as five golden bananas and a color-coded blueprint.

As you can tell, Donkey Kong 64 is all about collection. Sometimes bananas (gold or colored) are locked behind doors, requiring a specific Kong to open the way. This isn’t too bad in the beginning, but in later stages, the abilities of one Kong will be needed just so the others can reach their collectibles, too. This gets problematic if you’re trying to do everything with one Kong before moving on to the next, but it’s downright maddening when you realize that you’re just a few colored bananas short and have no idea where they can be. 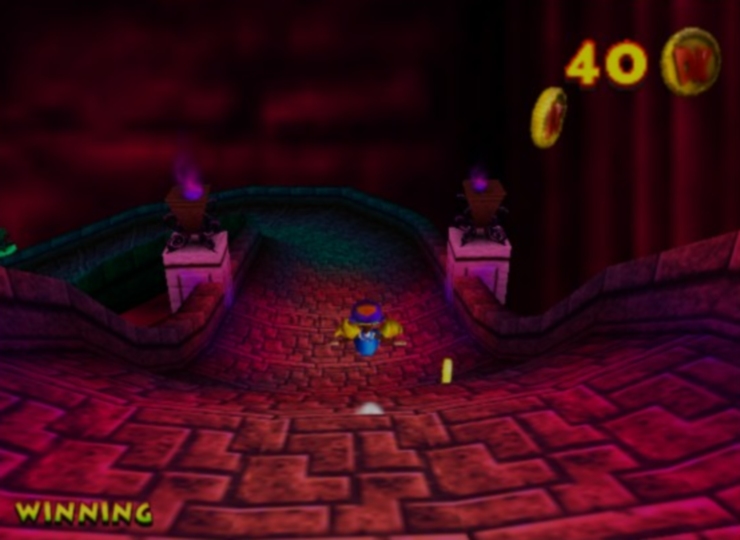 If you’re bent on finding everything and obtaining that prestigious 101 percent completion (Oh, Rare, you’re so silly!), you’re bound to spend at least a few dozen hours playing. Unfortunately, every single one of those hours isn’t filled with raucous moments and unbridled joy. Unlike Super Mario 64, which is kind of a blast from start to finish, Donkey Kong 64 is slightly marred by some issues. It’s not uncommon to scour a level over and over in search of 10 elusive colored bananas, only to realize that they were locked behind another character’s special ability.

Worth noting is how bad the mandatory minigames are. Some are simple, with tasks like surviving an onslaught of baddies, but others are downright awful. Krazy Kong Klamour is especially terrible as it requires you to shoot a certain number of golden bananas while the lights go on and off. In a later version of the minigame, the lights go off way too soon, and because hits in the dark don’t count, you’ll need to have lightning-fast reflexes. You also have to watch out for the Kongs as shooting them increases the number of golden bananas you need to hit.

Even after all of those complaints, though, there’s no denying that the basic formula that Donkey Kong 64 is built on is solid. The moment you enter a new world, you feel a grand sense of wonder. You can’t help but to happily run around the levels, exploring to your heart’s content and grabbing bananas left and right. Sure, there are some issues along the way, but the design of every world is absolutely exquisite. 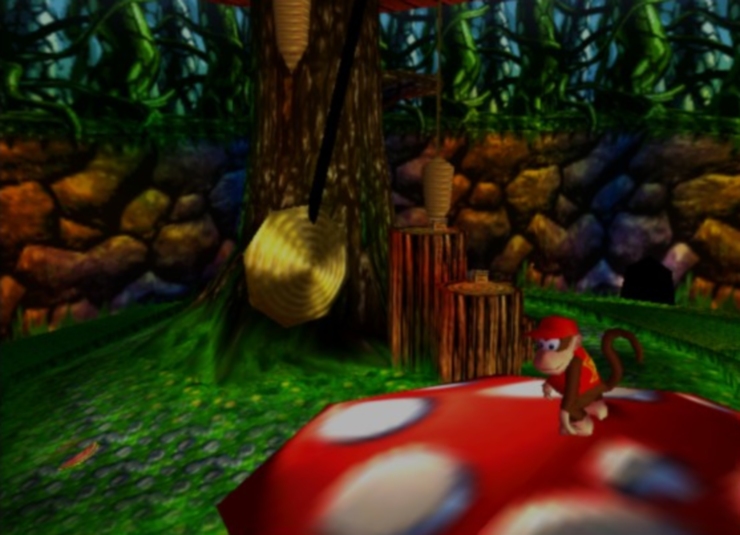 The fact that the worlds are so much fun to visit makes all of the other problems tolerable. Whether you’re entering Jungle Japes for the first time, battling evil toys in Frantic Factory, or climbing giant mushrooms in Fungi Forest, you’re bound to walk away from Donkey Kong 64 with a smile on your face. And if you’re looking to explore every single square foot of those stages, you’ll be glad to know that there’s a lot to see and do. Sometimes it does get repetitive, but it’s just a lot of fun finding new areas and uncovering secrets.

Donkey Kong 64 is very easily one of the best-looking titles on the Nintendo 64. These days, it shows a bit of its age, but only as far as its textures are concerned. Other than that, character models sport a charmingly polygonal look, and the various worlds are still quite nice to behold. Throw in Grant Kirkhope’s awesome soundtrack and you’ve got a winning audiovisual presentation.

Though it’s not as perfect as I remember it being when I was a kid, DK’s Nintendo 64 romp is still a lot of fun. Even the four-player split-screen multiplayer mode is kind of enjoyable these days. Beyond the mild extras, though, the bulky adventure has more highlights than foul moments, making this a classic worth revisiting despite some nasty warts. If you skipped the game but remain curious, it’s worth checking out. And if you loved Donkey Kong 64 in 1999, you should definitely pay the Kongs a visit for old time’s sake.