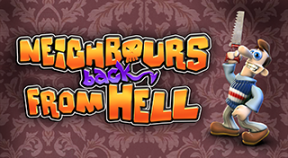 Neighbours back From Hell

Did you know, the Germans have a word for laughing about other people's failures, called "Schadenfreude"? And this is what Neighbours back From Hell is all about: Making people laugh about the misfortune of others. In this HD Remaster of the beloved childhood gems Neighbours From Hell 1 and 2, you play the star of a cheeky TV Show who is constantly pranking his nasty neighbour in the most creative and hilarious ways. You want to replace a candle with a firework? What about replacing the shaving cream with the whipped cream? Go for it! Features: • Neighbours from Hell 1 & 2 Remastered in one package: 25 episodes set in the neighbour’s home, on a cruise liner, and in several different holiday locations around the world • All graphics newly rendered in Full HD • Framerate of all animations doubled for a smoother experience • Use stealth, skill and style to perform the perfect ambush • Easy to use interface and controls • Superb cartoon-style graphics • Big band soundtrack