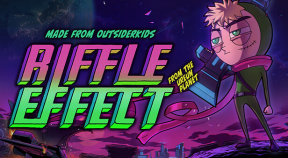 Gatto, a lone wolf mercenary, begins working with Rose, an aerospace A.I, on the recommendation of the captain who hired him.
In the midst of various events, Gatto's spaceship gets sucked into a wormhole and crash-lands on the planet Ureun.
Consequently, the spaceship loses its power and Rose’s function is deactivated.
Gatto ventures off to the planet Ureun to find a way to fix both the spaceship and Rose.

Choose between top-down or over-the-shoulder views depending on the situation to move on!
Avoid enemy traps and attacks while targeting their weak points!

[Destroy your enemies with various weapons!]

Depending on the situation, use various skills such as Turret, Shield, and Recovery to gain the upper hand in combat!
Fight your way with 2 types of skills: Battle Skill for combat and Passive Skill that empower Gatto!
Block enemy attacks with your shield and blow away the bad robots with devastating weapons!