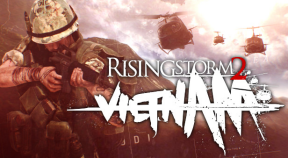 It is turkey time, so we have a Green Army Men update for you all, with new weapons and the opportunity to fight over Thanksgiving dinner. Head over to for more details!

With our 14th update, we are bringing you both new content for Vietnam AND setting up for a completely new addition - Green Army Men will be going official!

Within Vietnam itself, you will get:

This is now the 13th content update for you, bringing:

The last 2 remastered maps brought forward from RO2/RS1:
The third map is a favorite community map made official:

This update brings in some new weapons for the Northern forces:

Many other changes and fixes, including:

With this, the 12th free content update in 18 months, we are bringing you a long list of performance improvements, audio occlusion, new weapons for the North Vietnamese forces, new maps, new heads - and a specific community request.

New weapons for the North Vietnamese:

New weapon for the Southern forces:

A considerable number of performance improvements have been implemented for this update, to player characters, particle effects, level optimizations, changes to the Instanced Rendering system, a new set of weapon LODs and a set of changes to textures, with an emphasis on improving how texture streaming is handled.

This update marks the release of two ‘remasters’ of fan-favourite Red Orchestra 2/Rising Storm maps, taking them from their original settings and into the war-torn jungles of Vietnam:

We have implemented a new system where gunshots and other ingame sounds are appropriately affected by their environment. This does not apply to all sounds in the game, but will affect any sound loud enough to be heard through walls, and be muffled/occluded by obstacles such as buildings or terrain.

For a little more variety, we are providing you with 3 new heads for the North Vietnamese, plus 3 for the US Army and Marine Corps. The 3 US heads represent the diverse ethnicity of the US forces of the period, with one being Hispanic, one Native American and one Asian.

And last, but by no means least, cinematics for the conclusion of a campaign!

After we released the Multiplayer Campaign update, players requested suitable cinematic sequences for the end of a Campaign. You spoke, we listened, we agreed - so here they are!

With this update, we are bringing back the much-loved Multiplayer Campaign Mode from previous games, adapted to the Vietnam War. The key features:
In addition, one more map from the RISING STORM 2: VIETNAM $40,000 Modding Contest makes it to an official release:

As always, there are a large number of smaller updates, bug fixes and enhancements, this time including:

And finally, 3 other maps are out of beta, featuring updates driven by feedback from the players:

This update adds the Army of the Republic of Vietnam (ARVN) as a full playable faction in the game. The update also brings new weapons, specifically for the ARVN:
There are also 2 new maps, showcasing the ARVN forces:
In addition, the update also includes 3 maps, made by fans for the fans, from the RISING STORM 2: VIETNAM $40,000 Modding Contest, now being officially introduced to the game:

Rising Storm 2: Vietnam is the next in the series that has twice been PC Gamer’s ‘Multiplayer Game of the Year’, bringing the franchise into the era of automatic rifles, man-portable grenade launchers and more modern weapons systems. Still with the authentic look and feel and realistic weapon handling that the series is known for.

Continuing the Tripwire tradition of providing strong support for games post-launch, Vietnam has already been updated multiple times, providing the player with:


Rising Storm 2: Vietnam offers intense action for up to 64 players in battles between the forces of South Vietnam (the US and their Allies) and those of the North - the regular, main-force units of North Vietnamese Army, plus the guerilla fighters of the National Liberation Front (or Viet Cong).

SOUTHERN FORCES - US, Australian and ARVN

The Southern forces have firepower and mobility on their side, with each army having its own unique supporting arms:

For mobility, they have access to full helicopter support:
Tactically, the Southern squad leaders become important - so long as the squad leader is alive and in a smart location, the rest of his squad can spawn in on his location. So keep your squad leaders alive at critical moments!

As for weapons, the Southern forces had a wide range of the best weaponry of Western nations, ranging from older, WWII-era leftovers, through to the latest technology of the time:

The Northern forces offer a broader mix, with the People’s Army of Vietnam (PAVN - or NVA) as the regular, disciplined and better-equipped main fighting force, in comparison to the National Liberation Front (NLF) guerrilla fighters, equipped with whatever weaponry was passed down the chain to them from Russia and China - known as the Viet Cong. For supporting weapons each has:

To compete with the Southern forces’ mobility, the Northern forces have their own mobility - and stealth:
The weaponry for the Northern forces is wide-ranging - the PAVN well-equipped with modern weapons delivered from Russia and China, while the VC have to work with a wide variety of weapons: