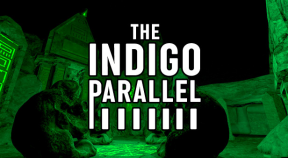 I want to thank everyone who has supported me. It took 5 years to make this game and I've poured my soul into it. Your support means the world to me.

Please report any bugs to the bug-report channel on Discord

The Indigo Parallel will be available on both Mac and PC

On the day one release, both Mac and PC users will be able to play The Indigo Parallel.

The game will be just as weird on both systems.

The Indigo Parallel comes out in a month so here is a new trailer for the game! It is now featured on the steam page.

The Indigo Parallel has an official Reddit page. Join it here:

If you are interested in the game, the progress and its development, here is the official Discord server:

This server is also the place were I get feedback from testers to improve the game.

How The Expanse turned me into a Game Developer

I started with being a VR designer on The Expanse TV show in 2017 (season 3) onwards to making my own games. For both game development and VR simulations (for TV) I use Unity as the gaming engine.

I've spent 4 years on The Indigo Parallel and I am very passionate about it. While carefully listening to feedback from testers I strive to make the best and most unique game possible. I also want to thank all The Expanse fans who are showing interest in my game.

Gameplay will vary depending on the direction the player chooses to explore and the choices they make along the way. The Indigo Parallel incorporates numerous pathways leading to environmental puzzles, shooting mini games, the use of vehicles to progress, and communication terminals to interact with.

The goal of the Indigo Parallel is to create a game that allows the player to discover new and hidden pathways during each playthrough. Choices made throughout the game unlock new areas and alter existing levels.

Each element of this game, from the hieroglyphics to game play, the textures to the models, has been created through years of passion by a solo developer.

The Indigo Parallel is a unique experience. Its rich non-linear environment showcases a dark future with plenty of secrets.

Be prepared, this game is weird.